New York Rangers are good but…

The Islanders are in New York tonight to play the NY Rangers at Madison Square Gardens and I’m really looking forward to seeing the best team in the East playing at home. Brad Richards left the Stars last year to play with the Rangers and is doing great here.

However, the Dallas Stars are also playing great and it’s possible we’ll play the Rangers in the Stanley Cup finals. That would be pretty awesome.

This season is so different from past “just- about” seasons that I can’t help but be enthused that the Dallas Stars will close out playoff entry before the NCAA tournament rather than trying to back in on the last day of the season.

Looking back on this season Dallas has beaten some of the best teams with wins against St Louis, Vancouver, NY Rangers, Boston, Washington, Chicago and New Jersey. And we gave Philadelphia and Pittsburgh a strong showing.

So why can’t we win it all with our captain, Brendon Morrow back from injury now?

I’m trying to figure out how to stay in New York for the Pittsburgh Penguins and Crosby’s return from injury on Thursday against the Rangers…..

The big decision tonight will be which Rangers Jersey to bring home. It won’t be Brad Richards.

However, that being said, he scored twice and assisted on the overtime winner. New York fan’s clearly live our ex Dallas Star. 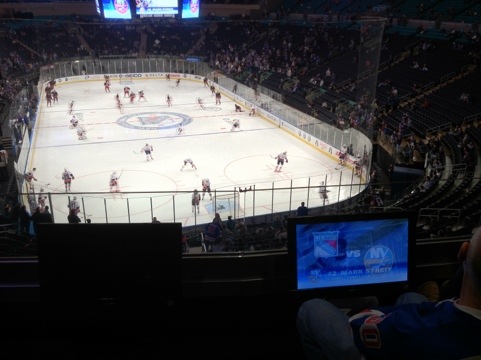