Russia and the Baltics

The Lufthansa Flight over the UK to Frankfurt was relatively short considering I slept for about half of the ten-hour flight.

After a three-hour layover I took a two-hour flight to Stockholm where Regent Cruise Lines met me and too me on a 45 minute (two story) bus ride to the Scandic Grand Central Hotel located in old town Stockholm. Peter arrived about two hours later and we had a great time walking around old Stockholm on a beautiful warm evening. 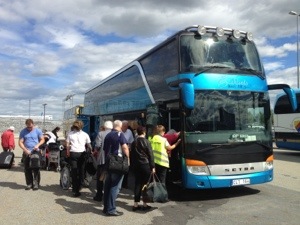 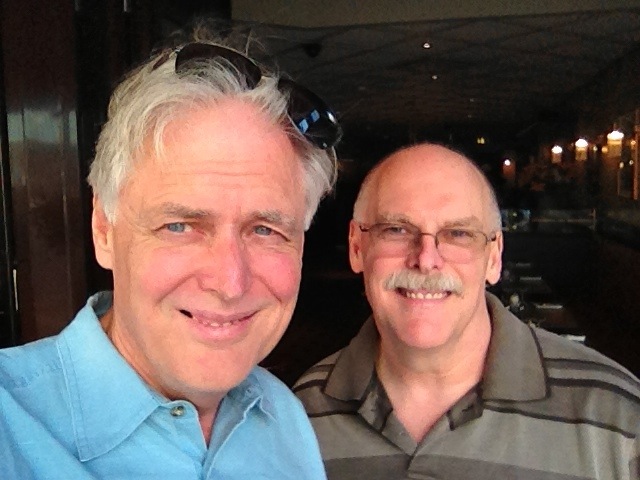 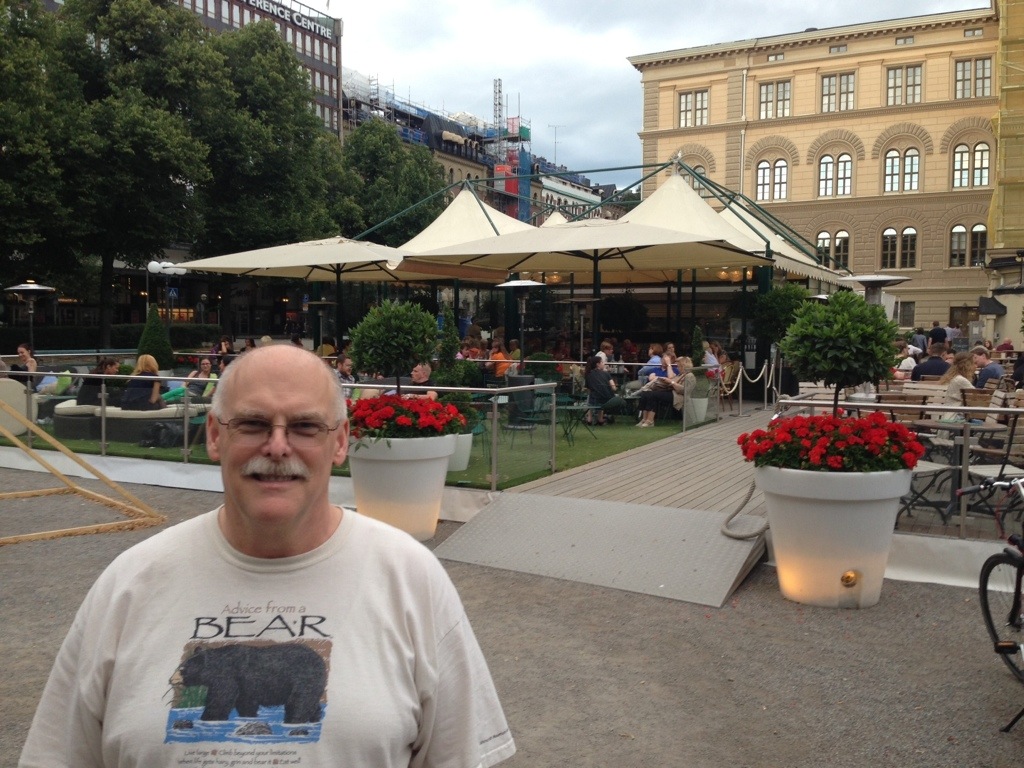 On Thursday we spent the morning walking old town Stockholm and shopped for a backpack for Peter. Then we relaxed on the sidewalk cafe waiting for our tour bus ride to the cruise ship after lunch. It was a short 15 minute trip and boarding the Regent Voyager went quickly. We toured the ship stopping at several lounges along the way and confirmed our dinner appointment times. We started the cruise with a poolside Beatles party and then went to the French Restaurant at our appointed time and spent the evening with a very nice retired couple from Virginia. 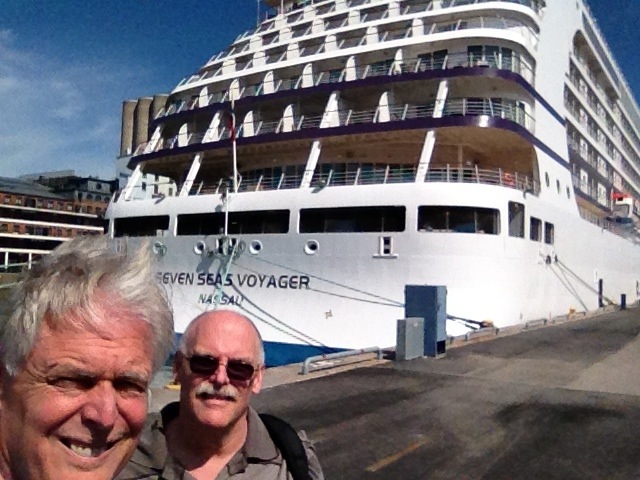 On Friday morning we arrived at Helsinki in Finland and after a relaxing morning on the ship, including breakfast in our room, we went on our afternoon bus tour of the city. We walked along the pier back to our cruise ship and then went to dinner with the ship’s executive concierge along with four other ship guests. We got the royal treatment which was pretty nice. 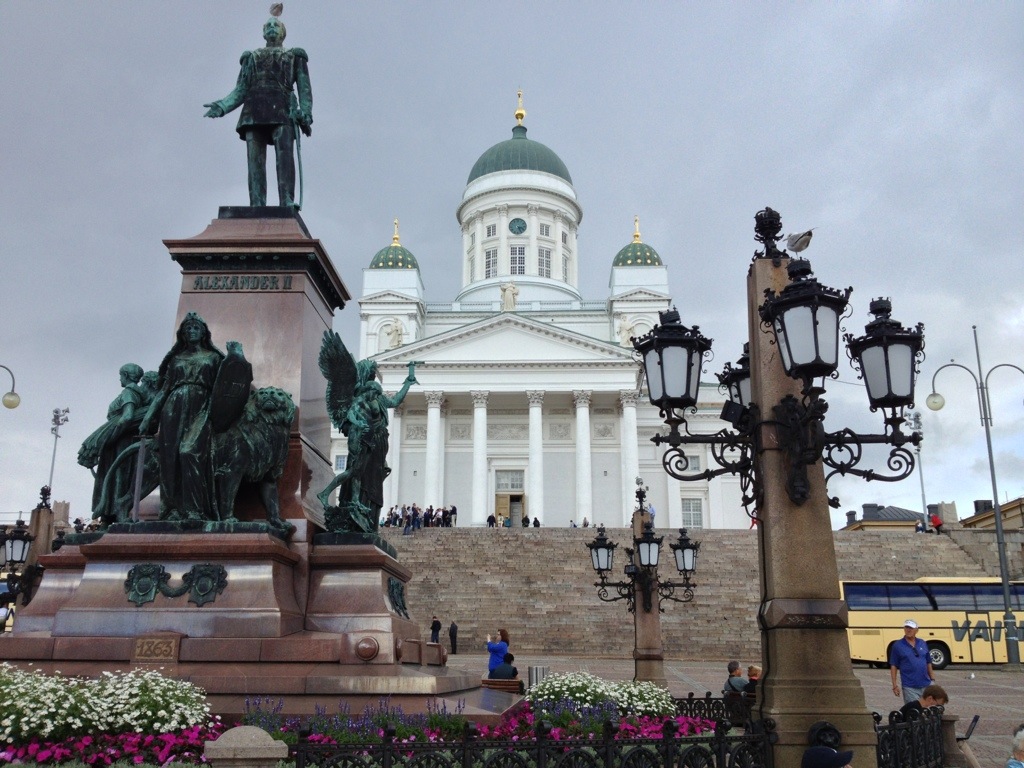 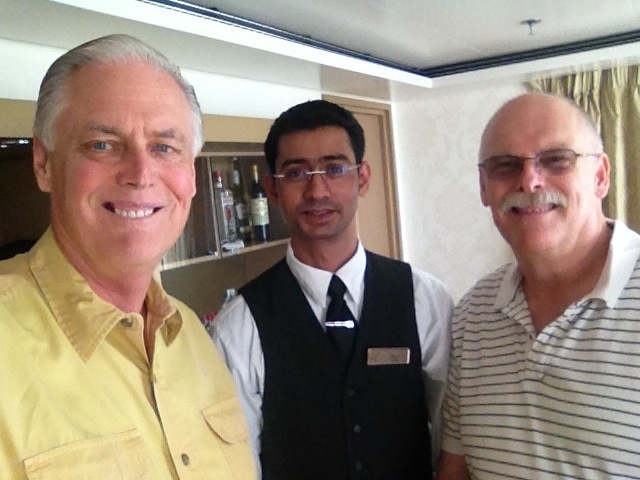 On Saturday morning we docked at St Petersburg, Russia and after some fun with Russia Customs, we met Irena, our tour guide and visited the Peteroff Palace and then the Hemitage museum. Credit cards are accepted widely and there is wi-fi in many places. The people are somewhat stoic but our private tour guide was outgoing and very knowledgable. She went out of her way to accommodate our tour objectives and ensure our safety.

After dinner on the ship we boarded our tour bus once again for a music and dance show at a local theatre. It was very entertaining and when we arrived back at the ship around 10:45 pm the sun was still up. 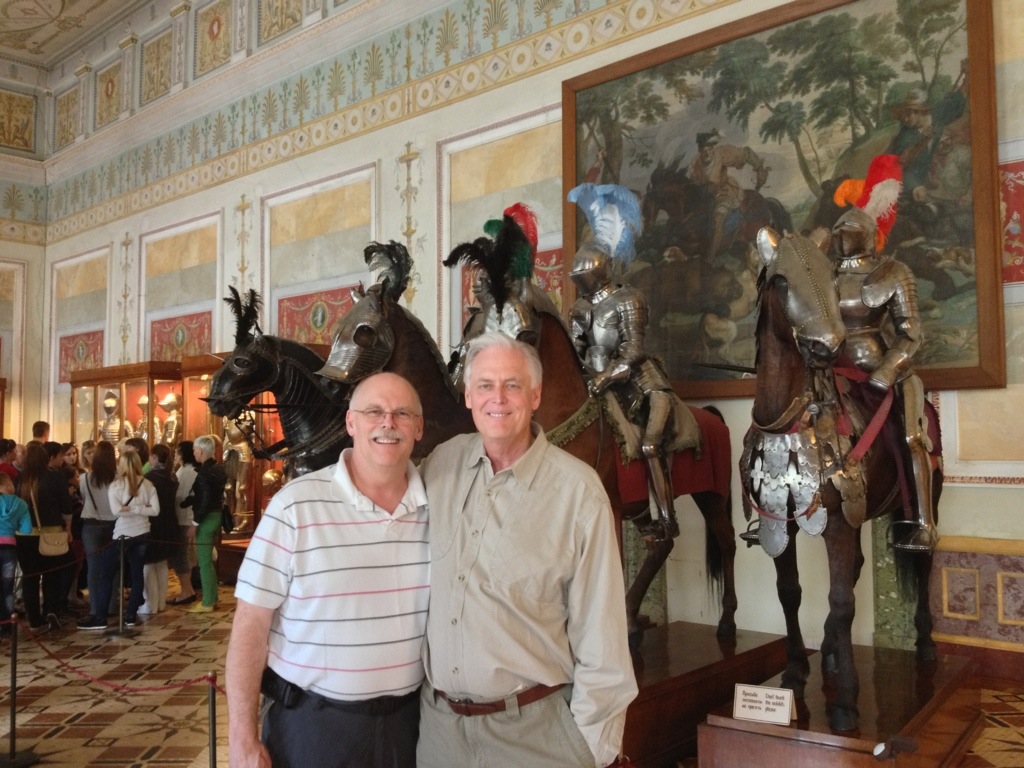 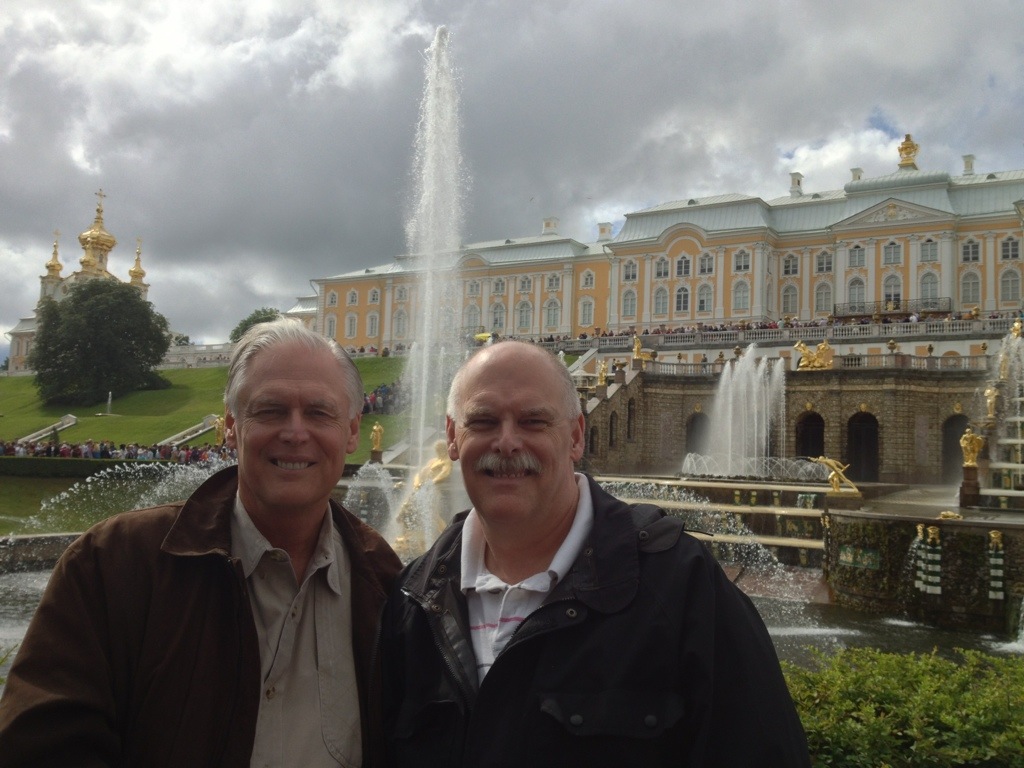 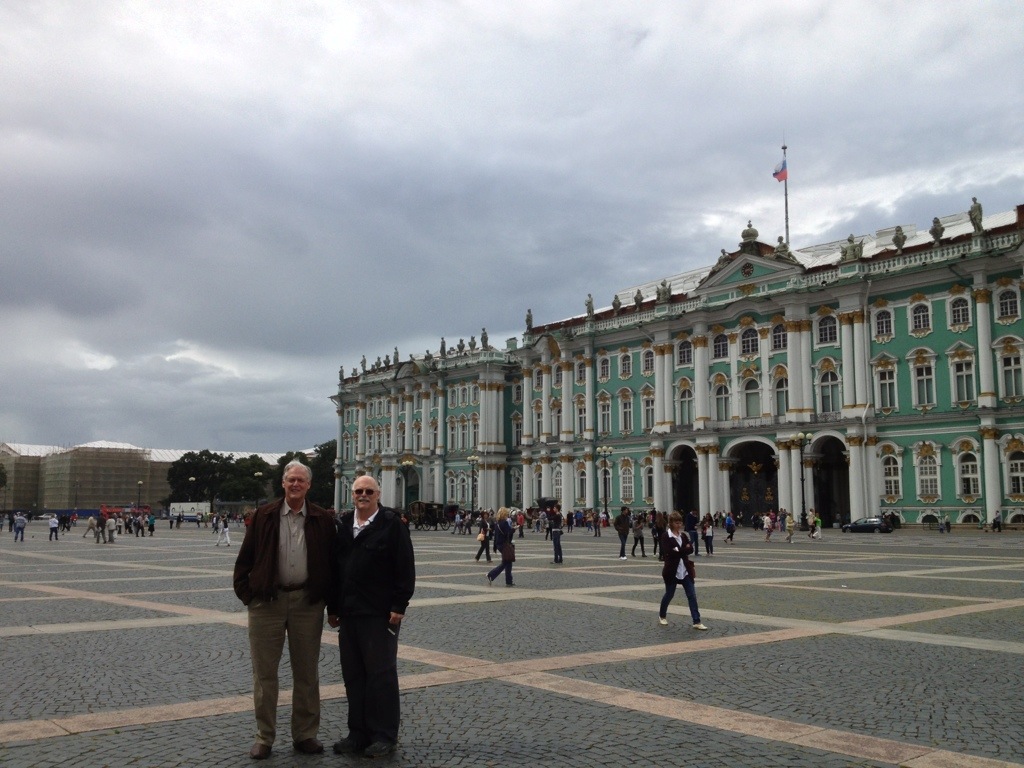 On Sunday morning we arose at 5:00 am and met Irena past Russia customs and she took us to the St Petersburg Train station where we boarded a four-hour bullet train ride to Moscow. The train travelled at 240 kph and our first class seating was very comfortable. The beautiful countryside could of easily been mistaken for anywhere in North America. 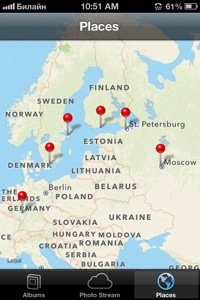 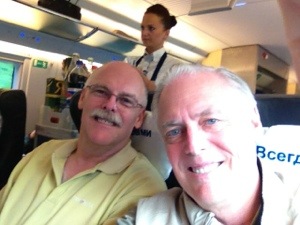 Irena, our Moscow guide, met us at the train station and took us to the Kremlin and Red Square. We had lunch at a restaurant on the square and then visited St Basil, a beautiful church, and then a modern nearby shopping mall. Then we visited a lake beside a park and travelled to Moscow State University. Irena took us on the subway back to the train station. With granite floors, marble walls, stained glass and mosaic art everywhere, this subway exceeded the quality of any that I have traveled on. Our four-hour return to St Petersburg was very pleasant. 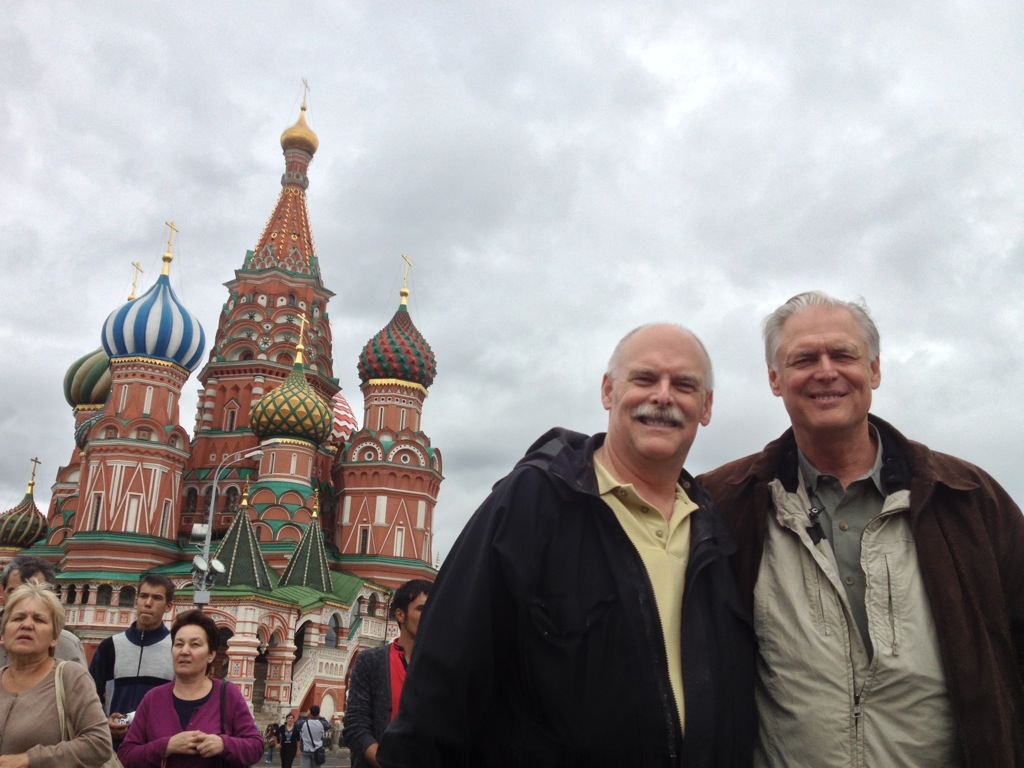 On Monday we met Natasha, a new guide, and visited the Palace of Catherine the Great and then had lunch at a downtown cafe. Afterwards we visited the Church of the Spilled Blood, an unbelievably beautiful demonstration of religious art in mosaics. We returned to our ship and dined in one of the very fine restaurants on the ship. 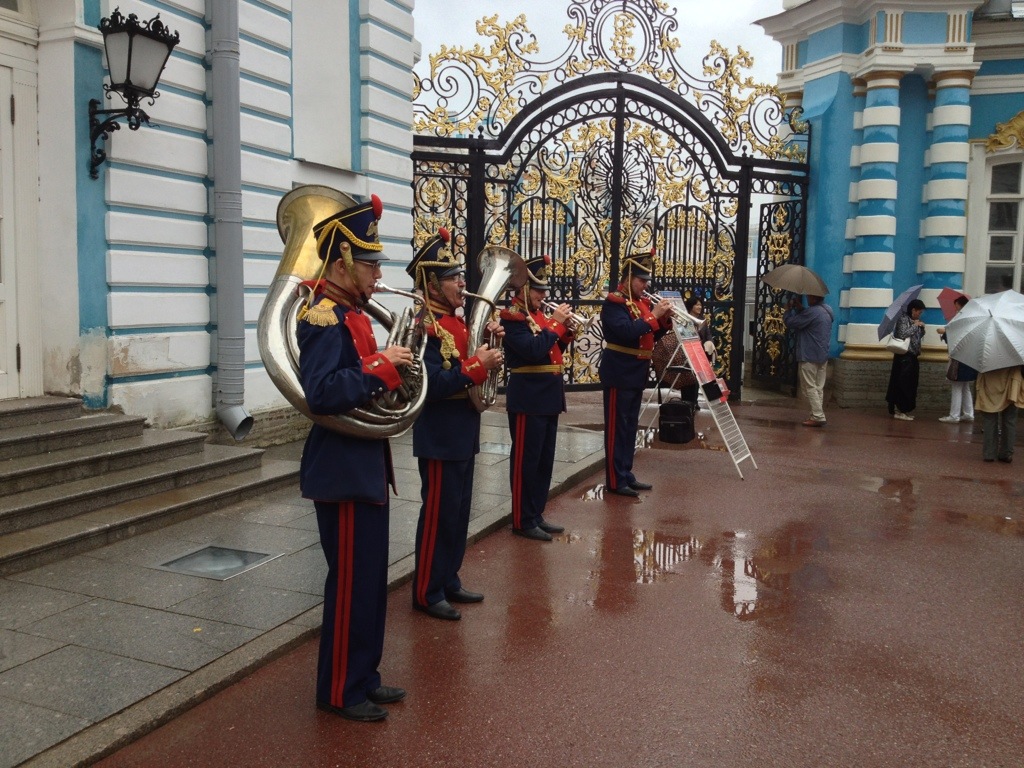 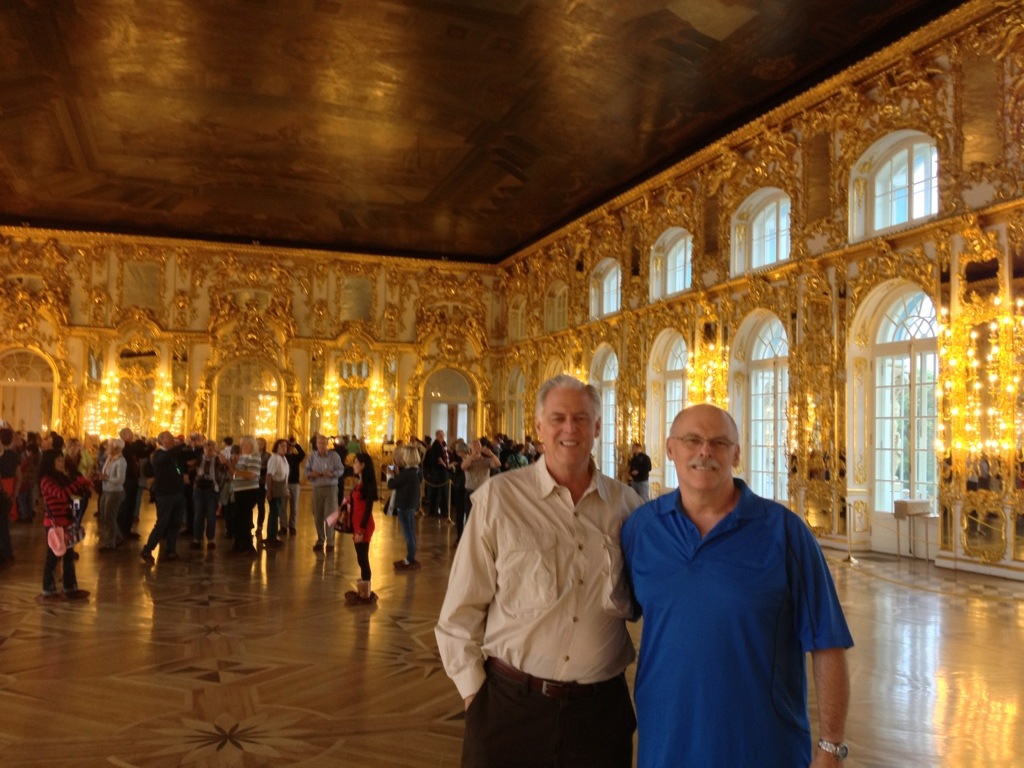 On Tuesday, we docked at Tallin, Estonia and completed a walking tour of the Old Town, including lunch at a restaurant on the square. After a delightful music show at a monastary we went back to the ship and took part in a tour of the Bridge of the ship. 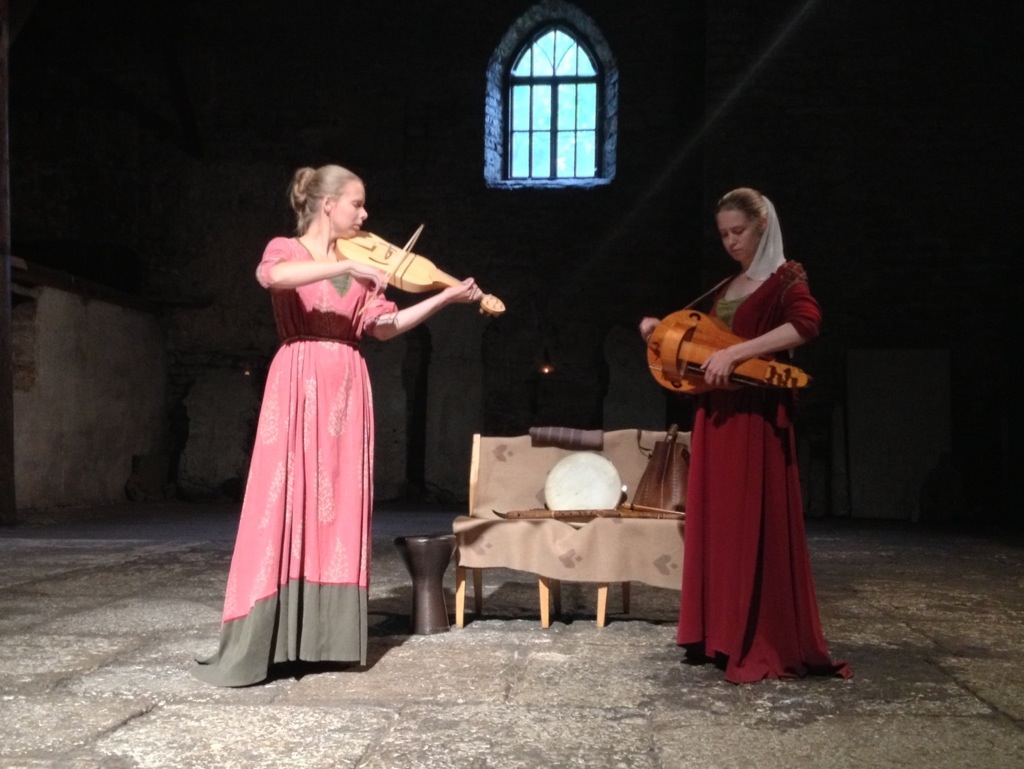 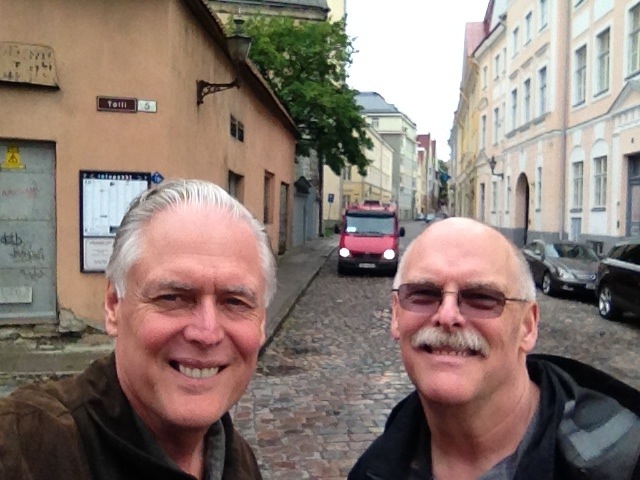 On Wednesday morning we were able to sleep in and enjoy breakfast in our room. Our bus tour to Riga, Latvia and then onto Siguida and Turaida started after docking late in the morning and after a very interesting and educational five hour tour with a highly educated tour guide, we returned to our ship for another excellent meal. 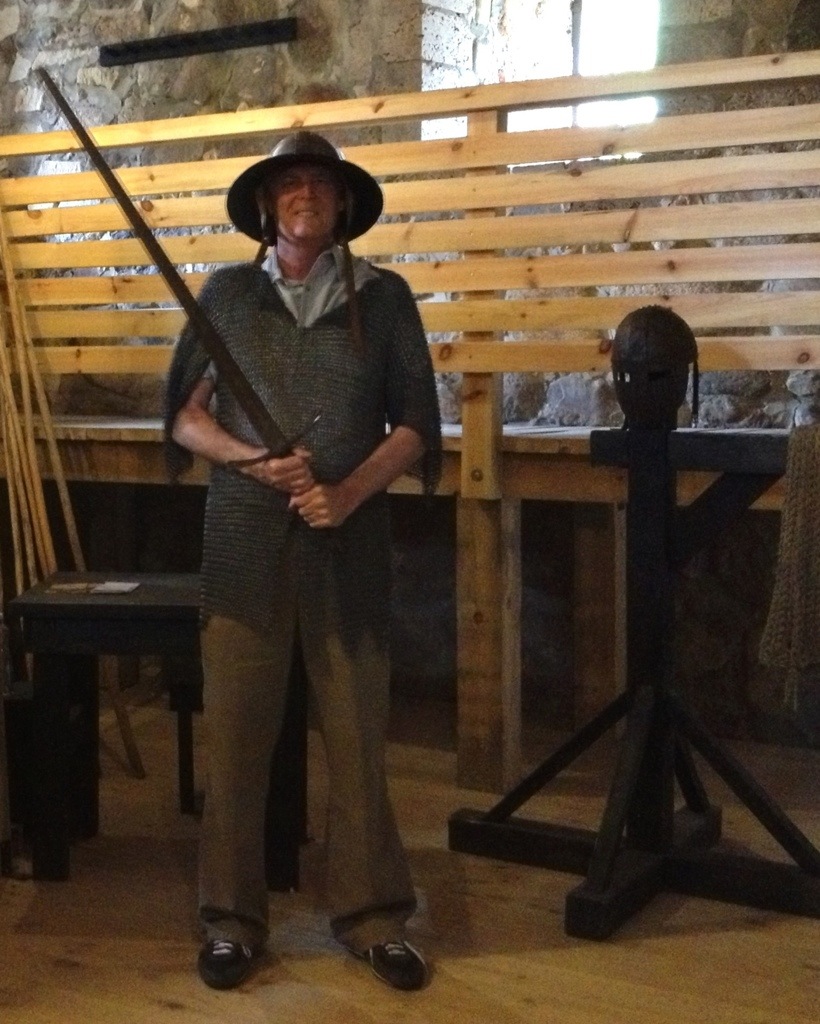 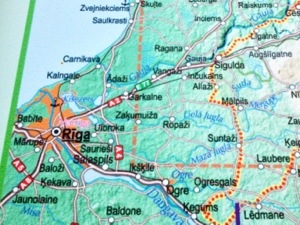 On Thursday morning we docked at Gdansk, Poland and boarded a bus for Stutthof, Poland, a concentration camp where 110,000 prisoners were executed by the Germans during the war. After our visit to the Haloucast Museum in Jeruselem last October I experienced some deep feelings walking through this “chamber of horrors” and seeing a typical living condition, meagre menu, extermination ovens, etc. and this was one of the smaller camps. 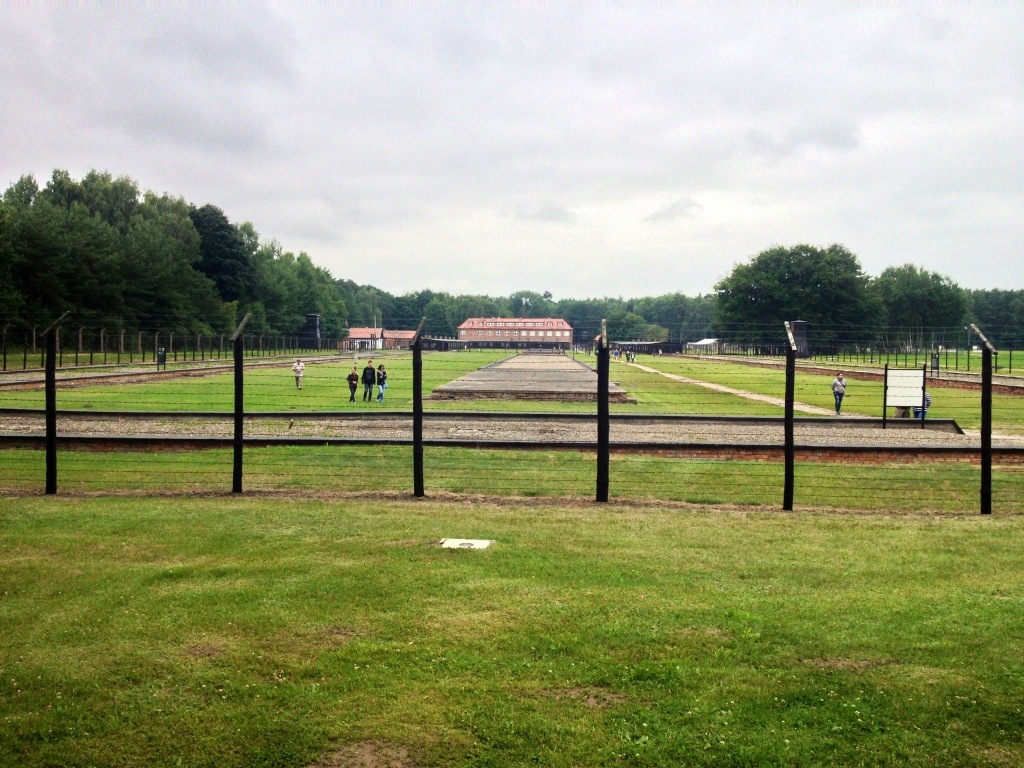 On Friday we docked at Ronne, Denmark on Bonholm Island. The war history here is unique and the city was destroyed by the Germans and then defended by the Russians. It has been rebuilt into a beautiful little city. 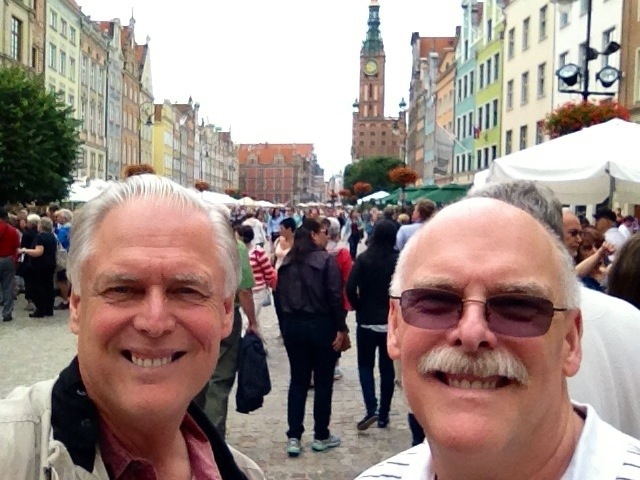 On Saturday we awoke very early in the morning and boarded a tour bus on the Autobohn Freeway to Berlin, Germany from our seaside port near Rostock. Germany. It was a seven hour round trip ride with four hours in Berlin and the Berlin Wall was a featured event and another bucket list item off my list. 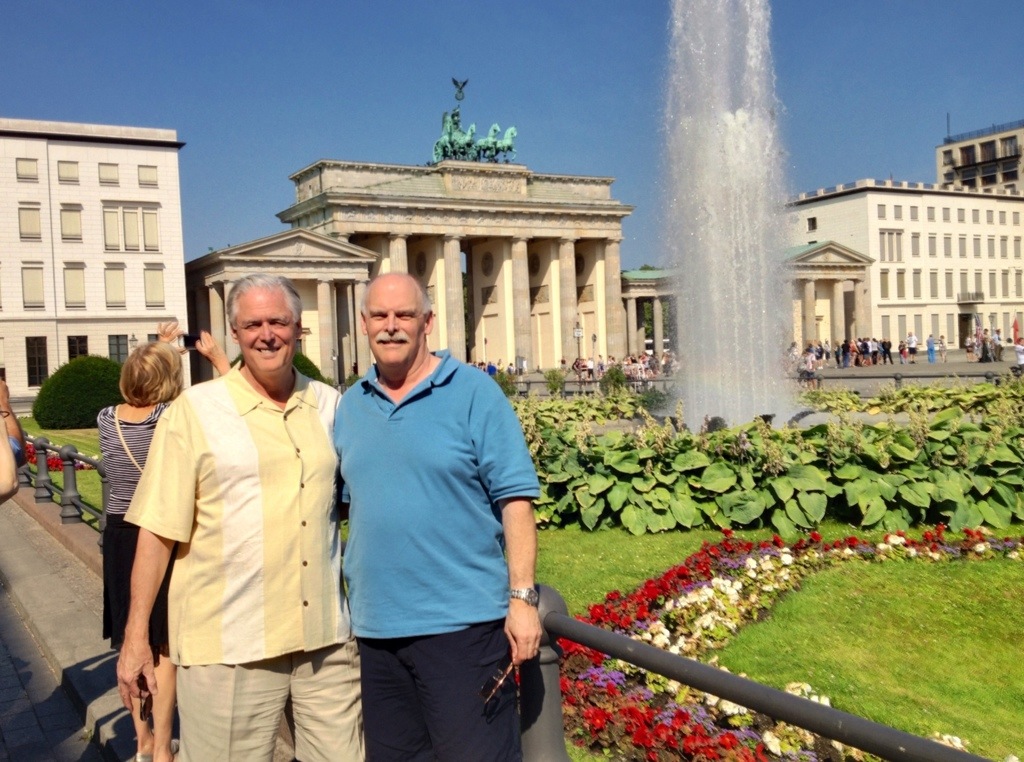 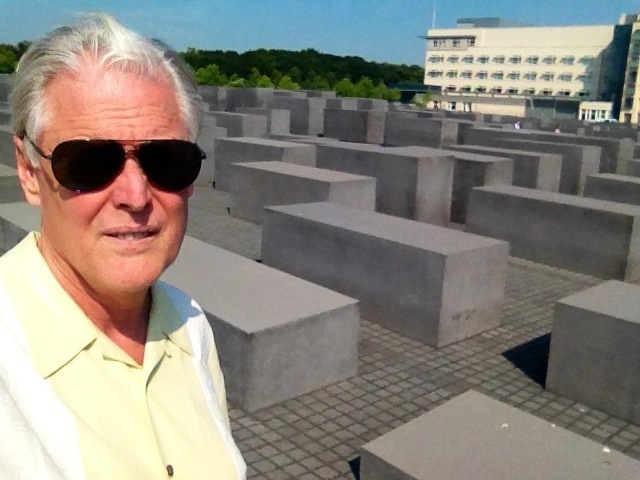 On Sunday morning we awoke very early and after Peter left for the airport to return home, I boarded a tour bus for a city tour of Copenhagen, Denmark, our stop for the day. The famous Little Mermaid statue was just one of the many, many sights to see in Hans Christian Anderson’s home town. This is definately a place I’d like to return and see more of. 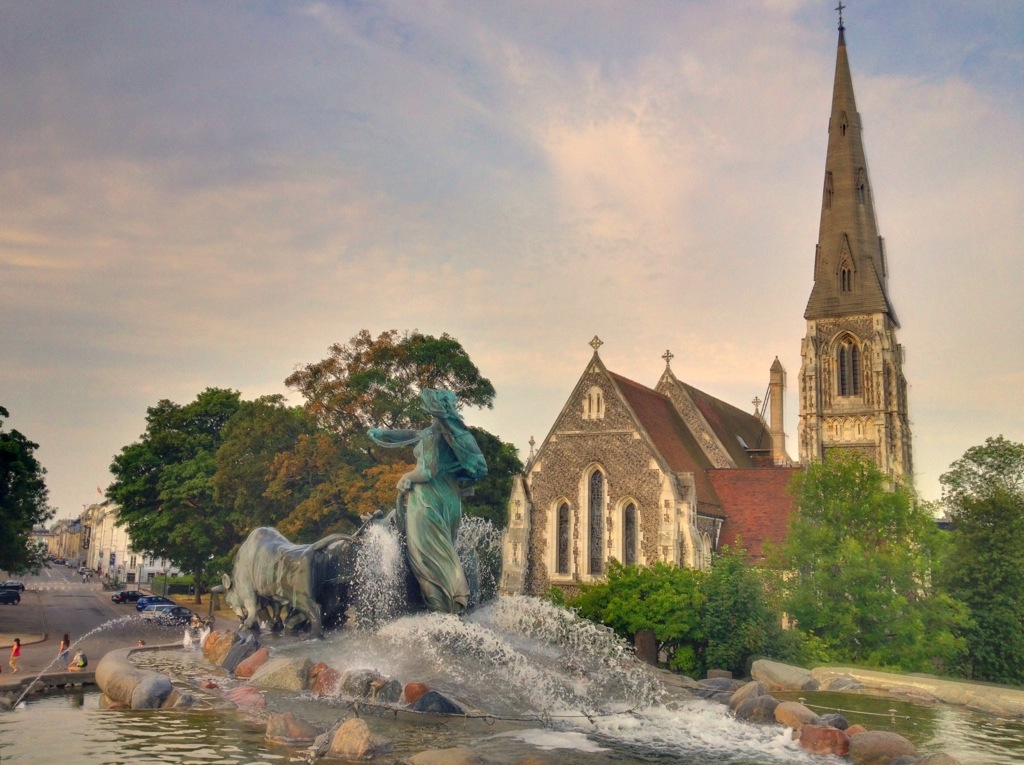 After the Copenhagen tour I left for the airport for the long journey home leaving at 4:00 pm Denmark time and arriving in Dallas at midnight Texas time or 7:00 am Denmark time.

It was a fabulous experience and a special time with my brother that I will never forget.